Climate is regulated by complex interactions among components of the Earth system.

Teaching about climate interactions is supported by six key concepts:

a. Earth's climate is influenced by interactions involving the sun, ocean, atmosphere, clouds, ice, land, and life. Climate varies by region as a result of local differences in these interactions.

There are 5 more fundamental concepts. See them all...

b. Covering 70% of Earth's surface, the ocean exerts a major control on climate by dominating Earth's energy and water cycles. It has the capacity to absorb large amounts of solar energy. Heat and water vapor are redistributed globally through density-driven ocean currents and atmospheric circulation. Changes in ocean circulation caused by tectonic movements or large influxes of freshwater from melting polar ice can lead to significant and even abrupt changes in climate, both locally and on global scales.

c. The amount of solar energy absorbed or radiated by Earth is modulated by the atmosphere and depends on its composition. Greenhouse gases— such as water vapor, carbon dioxide, and methane— occur naturally in small amounts and absorb and release heat energy more efficiently than abundant atmospheric gases like nitrogen and oxygen. Small increases in carbon dioxide concentration have a large effect on the climate system.

d. The abundance of greenhouse gases in the atmosphere is controlled by biogeochemical cycles that continually move these components between their ocean, land, life, and atmosphere reservoirs. The abundance of carbon in the atmosphere is reduced through seafloor accumulation of marine sediments and accumulation of plant biomass and is increased through deforestation and the burning of fossil fuels as well as through other processes.

e. Airborne particulates, called "aerosols," have a complex effect on Earth's energy balance: they can cause both cooling, by reflecting incoming sunlight back out to space, and warming, by absorbing and releasing heat energy in the atmosphere. Small solid and liquid particles can be lofted into the atmosphere through a variety of natural and manmade processes, including volcanic eruptions, sea spray, forest fires, and emissions generated through human activities.

f. The interconnectedness of Earth's systems means that a significant change in any one component of the climate system can influence the equilibrium of the entire Earth system. Positive feedback loops can amplify these effects and trigger abrupt changes in the climate system. These complex interactions may result in more rapid climate change and on a larger scale than projected by current climate models.

Earth's climate is governed by several different types of processes.

Oceanic, atmospheric, biologic, and geologic processes all drive the climate system and result in regional differences in climates on Earth. Many climatic processes such as the greenhouse effect and the carbon cycle are the result of the interplay between the "spheres" of the Earth system (atmosphere, cryosphere, geosphere, biosphere). Feedbacks between various components work to exacerbate or mitigate changes to the climate.

Climate cycles, feedbacks, and interplay between causes and effects 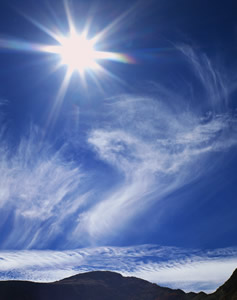 Provenance: Image from Microsoft Office clip art
Reuse: If you wish to use this item outside this site in ways that exceed fair use (see http://fairuse.stanford.edu/) you must seek permission from its creator.
These ideas address some of the natural complexities of our climate system and build a foundation for the understanding of key components such as the carbon cycle, the greenhouse effect, and interactions and feedback loops. These topics are active areas of climate research and include important questions such as:

On a more basic level, the processes covered in this principle can easily be observed, such as: 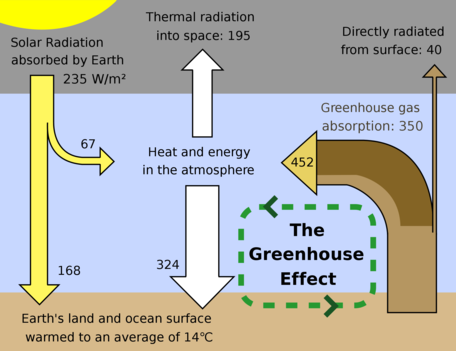 ×
Simplified schematic of the flows of energy between space, the atmosphere, and Earth's surface depicting how heat is trapped near the surface, creating the greenhouse effect. From the Global Warming Art Project. (All units are Watt/m2.)

The natural greenhouse effect is a common area of misunderstanding. Educators should strive to explain this concept in a way that is as simple as possible but is still accurate.

Show a brief explanation of the greenhouse effect

Attempts to oversimplify the greenhouse effect can be counter-productive and further confuse learners. For younger students, the mental model of how the natural greenhouse effect is like a "blanket" that keeps heat under the covers may be appropriate, but a key difference is that a blanket retains heat that is generated by your body (or the Earth, in the analogy). In reality, the heat energy is originally coming from the Sun, not from the Earth.

High school and certainly, college students should have a clearer understanding of the mechanics of the greenhouse effect. This concept is essential to understanding how human activities are impacting the climate system.

Full comprehension of the carbon cycle requires an understanding of biogeochemical systems. Students also have to understand the different time scales at which carbon exchange takes place in the different reservoirs. Learning about the carbon cycle lays an important foundation to the understanding of the impact of burning fossil fuels. As shown in the famous Harvard Private Universe study, students struggle to build the connection between mass production through photosynthesis and carbon uptake, the burial of biomass, and fossil fuels - all these concepts are part of the carbon cycle.

The terminology of positive and negative feedback in a system can often lead to misunderstanding because the words 'positive' and 'negative' have other meanings. It is clearer to use the term 'self-reinforcing cycle' to describe the way that positive feedback can amplify the initial input. Negative feedback can be termed a 'self-dampening cycle.' 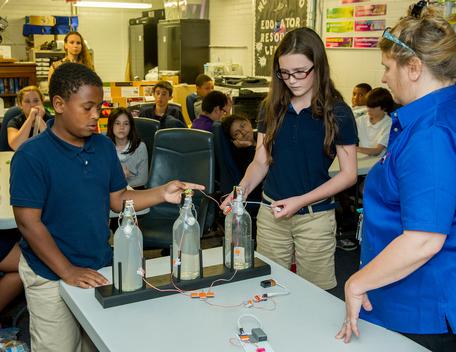 ×
Just because a process is complex does not mean it needs to be complicated. Teaching these basic climate science topics may be best handled by an approach that allows depth over breadth. If students are able to address a single topic with sufficient depth, they can come to an understanding of nuances like feedback loops or deep ocean circulation. So a good tactic would be to set aside time to explore a topic and several facets within it. An important part of climate literacy is an appreciation for scientific complexity, and even young learners can comprehend that a seemingly simple and linear process can be quickly complicated by other factors.

Another strategy for teaching these principles is the Earth systems science approach. This method teaches students about the "spheres" of the Earth system: the atmosphere, cryosphere, geosphere, and biosphere. An Earth systems approach is an effective way to illustrate the interplay between different components of Earth and that processes do not occur in isolation. Learn more and find specific examples from the InTeGrate project: Teach Systems Thinking or Incorporating Systems Thinking in the Classroom.

The Study of Earth as an Integrated System from NASA - a quick "explainer" on the various components of the climate system, including forcings, feedbacks, and tipping points.

What Factors Determine Earth's Climate? from the IPCC - a dense, one-page summary of the climate system, complete with a classic diagram of Earth's energy balance.

Carbon and Climate - an educational website with a carbon cycle applet for modeling your own projection on carbon emissions and future carbon sinks.