Jump to this Activity »
Heating it Up: The Chemistry of the Greenhouse Effect
https://www.explainingclimatechange.ca/lesson3/lesson3.html 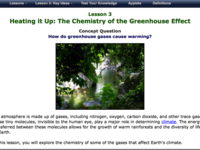 This lesson explores the chemistry of some of the greenhouse gases that affect Earth's climate. Third in a series of 9 lessons from an online module entitled 'Visualizing and Understanding the Science of Climate Change'.

Instructional sequence will take at least 2 hours to complete.

MS-PS1.A3: Gases and liquids are made of molecules or inert atoms that are moving about relative to each other.

MS-PS1.A6: The changes of state that occur with variations in temperature or pressure can be described and predicted using these models of matter.

MS-PS3.A3: Temperature is a measure of the average kinetic energy of particles of matter. The relationship between the temperature and the total energy of a system depends on the types, states, and amounts of matter present.

MS-PS4.B3: A wave model of light is useful for explaining brightness, color, and the frequency-dependent bending of light at a surface between media.

Systems and System Models, Energy and Matter, Structure and Function, Stability and Change, Patterns, Cause and effect, Scale, Proportion and Quantity
See Details »

hide
Systems and System Models, Energy and Matter, Structure and Function, Stability and Change, Patterns, Cause and effect, Scale, Proportion and Quantity

MS-C6.1: Complex and microscopic structures and systems can be visualized, modeled, and used to describe how their function depends on the shapes, composition, and relationships among its parts; therefore, complex natural and designed structures/systems can be analyzed to determine how they function.

MS-P4.7: Analyze and interpret data to determine similarities and differences in findings.

MS-P4.8: Analyze data to define an optimal operational range for a proposed object, tool, process or system that best meets criteria for success.

MS-P8.1: Critically read scientific texts adapted for classroom use to determine the central ideas and/or obtain scientific and/or technical information to describe patterns in and/or evidence about the natural and designed world(s).

HS-PS4-4: Evaluate the validity and reliability of claims in published materials of the effects that different frequencies of electromagnetic radiation have when absorbed by matter.

HS-PS1.B1: Chemical processes, their rates, and whether or not energy is stored or released can be understood in terms of the collisions of molecules and the rearrangements of atoms into new molecules, with consequent changes in the sum of all bond energies in the set of molecules that are matched by changes in kinetic energy.

HS-PS3.B1: Conservation of energy means that the total change of energy in any system is always equal to the total energy transferred into or out of the system.

HS-PS4.B4: Atoms of each element emit and absorb characteristic frequencies of light. These characteristics allow identification of the presence of an element, even in microscopic quantities.

Patterns, Cause and effect, Scale, Proportion and Quantity, Systems and System Models, Energy and Matter, Structure and Function
See Details »

hide
Patterns, Cause and effect, Scale, Proportion and Quantity, Systems and System Models, Energy and Matter, Structure and Function

HS-P8.1: Critically read scientific literature adapted for classroom use to determine the central ideas or conclusions and/or to obtain scientific and/or technical information to summarize complex evidence, concepts, processes, or information presented in a text by paraphrasing them in simpler but still accurate terms.