Jump to this Activity »
Understanding the Carbon Cycle: A Jigsaw Approach
https://serc.carleton.edu/NAGTWorkshops/climatechange/activities/15162.html 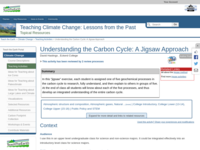 This is a jigsaw activity in which students are assigned to research one step out of five in the geochemical process stages of the organic carbon cycle. Students then teach their step in cross-step groups until everyone understands all five process stages.

HS-ESS2-6: Develop a quantitative model to describe the cycling of carbon among the hydrosphere, atmosphere, geosphere, and biosphere.

HS-LS2-5: Develop a model to illustrate the role of photosynthesis and cellular respiration in the cycling of carbon among the biosphere, atmosphere, hydrosphere, and geosphere.

Cause and effect, Scale, Proportion and Quantity, Systems and System Models, Energy and Matter, Structure and Function, Stability and Change
See Details »

hide
Cause and effect, Scale, Proportion and Quantity, Systems and System Models, Energy and Matter, Structure and Function, Stability and Change

HS-C3.1: The significance of a phenomenon is dependent on the scale, proportion, and quantity at which it occurs.

HS-C6.2: The functions and properties of natural and designed objects and systems can be inferred from their overall structure, the way their components are shaped and used, and the molecular substructures of its various materials.

HS-P7.4: Construct, use, and/or present an oral and written argument or counter-arguments based on data and evidence.

HS-P8.5: Communicate scientific and/or technical information or ideas (e.g. about phenomena and/or the process of development and the design and performance of a proposed process or system) in multiple formats (i.e., orally, graphically, textually, mathematically).

Activity could be modified to be used in a high school setting.