Controversy in the Classroom: Strategies for managing climate change discourse

View related webinar:
Teaching climate change in a community that does not want to hear it »

Sections of this page:

Understanding the controversy | Diffuse conflict and foster agreement | Responding to tough questions | Should we teach "both sides"? | Building media literacy 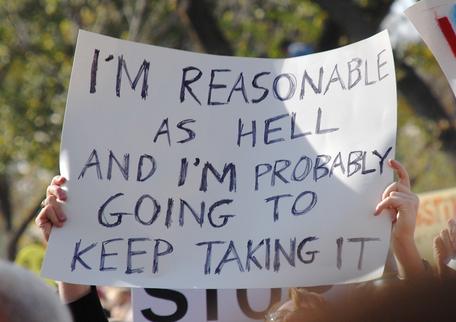 Reuse: This item is offered under a Creative Commons Attribution-NonCommercial-ShareAlike license http://creativecommons.org/licenses/by-nc-sa/3.0/ You may reuse this item for non-commercial purposes as long as you provide attribution and offer any derivative works under a similar license.
Climate change is one of the most high-profile science topics of our time. Most people have already heard about it and have formed opinions about various aspects of the issue. Because the science of climate change is closely related to public policy, controversy is somewhat inevitable. This isn't necessarily a problem - we always want science to inform public policy, even if it raises challenging questions.

This page aims to help teachers navigate the controversial aspects of climate change, and offers concrete suggestions for how to foster an open dialog with students, parents, or co-workers. This page is not about rebutting myths about climate change, but some common themes are addressed in CLEAN's teacher guidance section, such as the Sun is not causing recent warming, humans are impacting the climate system, and humans can take actions to reduce climate change and its impacts.

Controversy is not a bad thing

It's understandable to have reservations when diving into a controversial subject, but there are some upsides. If no one cared about climate change, there would be no controversy. But Earth's climate is relevant to almost everyone, and students are likely to have personal experiences and opinions about the topic. Since so much misinformation about climate change circulates through the media, you can offer a much-needed opportunity for students to learn about the subject in an organized, formalized way that will help them build scientific mastery amid a sea of opinions, misinformation, and hearsay. 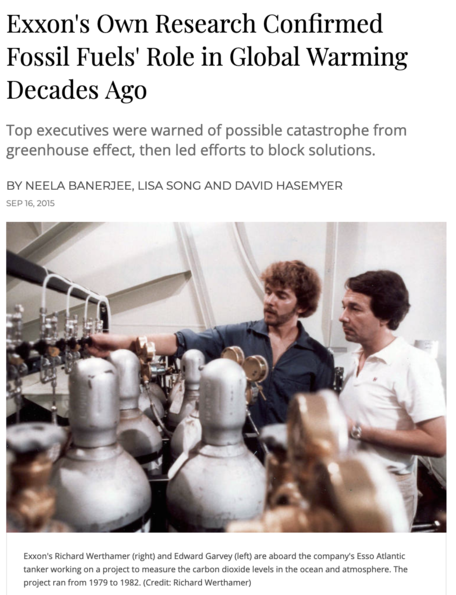 Provenance: Screenshot from InsideClimate News website
Reuse: This item is offered under a Creative Commons Attribution-NonCommercial-ShareAlike license http://creativecommons.org/licenses/by-nc-sa/3.0/ You may reuse this item for non-commercial purposes as long as you provide attribution and offer any derivative works under a similar license.
Why is climate change controversial?

In most cases, the root of the pushback on climate change is because the potential solutions are seen as objectionable by some. That's understandable, because climate change is a planetary problem, and calls for sweeping policy action. But certain corporations and political groups have worked to undermine public trust in climate science. (Example work on this topic: Supran and Oreskes paper and op-ed; InsideClimate News Exxon investigations; NESTA's response to Heartland Institute mailings)

While we can wish that these groups would have taken up the controversy in the policy arena, they instead chose to sow doubt in the science. It's important to understand that in most cases people that dismiss climate change are more concerned with policy and values, not science. They may express their doubts in a scientific-sounding way, but the basis for their unease usually runs deeper than that.

Because misconceptions about climate change are widely circulated, it's quite likely that your students may have latched on to incorrect information about climate or energy. Furthermore, the origins of this misinformation may be from family members or friends. It's important to not disparage the sources of misinformation, so as not to unintentionally criticize students or their friends and families.

Should you strive to avoid controversy?

The goal of teaching climate change need not be to steer clear of anything controversial. Ideally, your classroom offers a safe, trusting environment in which to explore the topic. If students have concerns, they should be encouraged to raise them so that you can understand their perspective and help alleviate whatever conflict the subject may be causing.

Set the stage to minimize conflict

Potentially disruptive conflict can often be avoided by establishing a classroom atmosphere that welcomes debate and dialog. In many cases, friction arises when people do not feel respected or listened to. 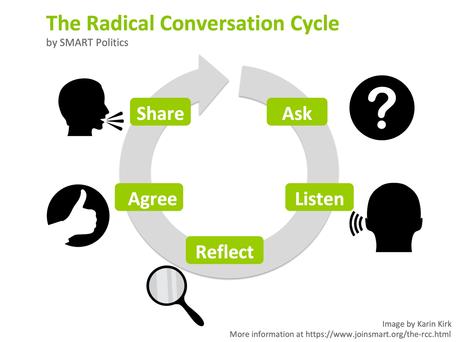 Provenance: Karin Kirk, Freelance Science Writer and Geoscientist
Reuse: This item is offered under a Creative Commons Attribution-NonCommercial-ShareAlike license http://creativecommons.org/licenses/by-nc-sa/3.0/ You may reuse this item for non-commercial purposes as long as you provide attribution and offer any derivative works under a similar license.

The more time you spend asking questions, listening carefully, and reflecting on the person's concerns, the better you will both feel.

If a conflict arises in front of students (or co-workers) you will understandably feel put on the spot, but as long as you keep the classroom open to all perspectives, it can be a useful learning experience. The more you can ask questions and keep the dialog open, the easier it will be.

Conversation strategies that can foster agreement 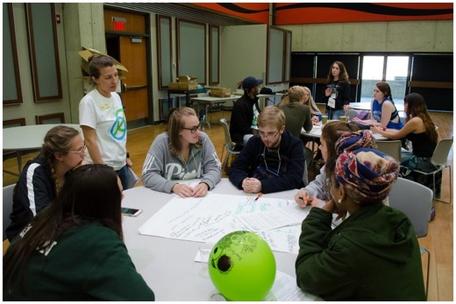 Provenance: Photo courtesy of Kelli Grabowski, used with permission
Reuse: If you wish to use this item outside this site in ways that exceed fair use (see http://fairuse.stanford.edu/) you must seek permission from its creator.
What if I don't know the scientific answer to someone's question?

There is no person on Earth that knows the answer to every question about climate and energy. Understandably, we all want to feel informed on the topics we teach. Nobody likes the idea of being called out on a question that we're unable to answer.

The good news is that you don't have to rebut every possible angle. Most of the time, pushback on climate change is not really about science. If you ask some probing questions and gently dig deeper, you will likely arrive at a place that has nothing to do with science. People are not upset about carbon isotopes; they are worried about taxes or high energy prices, or excessive government regulation. If you can guide the conversation toward the root of someone's concerns, then it will be much easier to respond to them.

This article from Yale Climate Connections profiles several teachers, including high school teacher Kelli Grabowski, who shares her story of being challenged by her students. She describes how she accepted the challenge to learn more, and it ended up having a positive impact on the class.

Ah ha! But what if I DO know the scientific answer to someone's question?

Undoubtedly, it's a satisfying feeling to be able to pinpoint precisely why a given piece of misinformation is flawed. But, knowing the 'answer' can sometimes just lead to more friction. One aspect of what makes people bristle about climate science is being 'told what to do.' Resist the temptation to use science to squelch people's doubts. Instead, try to unearth their concerns and hear them out. Strive for dialog, rather than relying on a position of authority. 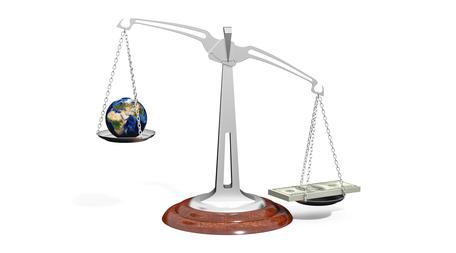 Provenance: Image by Arek Socha from Pixabay
Reuse: This item is offered under a Creative Commons Attribution-NonCommercial-ShareAlike license http://creativecommons.org/licenses/by-nc-sa/3.0/ You may reuse this item for non-commercial purposes as long as you provide attribution and offer any derivative works under a similar license.
Should we teach 'both sides'?

Occasionally we hear that we should teach a 'balanced view' of climate science. (Examples: Should Global Warming Be Taught in Public Schools? and School Science Lessons Targeted by Climate Change Doubters.

But some things do not have two sides. CO2 is a greenhouse gas that blocks outgoing heat and warms the atmosphere. This was established in the 1800s and is no longer an area of scientific debate. Greenhouse gas concentrations in the atmosphere are rising sharply due to the burning of fossil fuels; the Earth is warming. None of these points is contested in any scientific circle. When it comes to teaching science, it's essential to stick to credible science from the scientific community. To do any less would be a disservice to our students.

That said, the wider topic of climate change and climate policy is absolutely a multifaceted issue. Discussions about policy, energy, economics, social science, or personal actions will have many perspectives. The need for 'two sides' on the science can be sidestepped by offering two (or more) sides in other realms. Assure parents and students that there is plenty of room for dialog and debate about how we should respond to climate change.

Examples of role-playing activities that tackle responses to climate change: 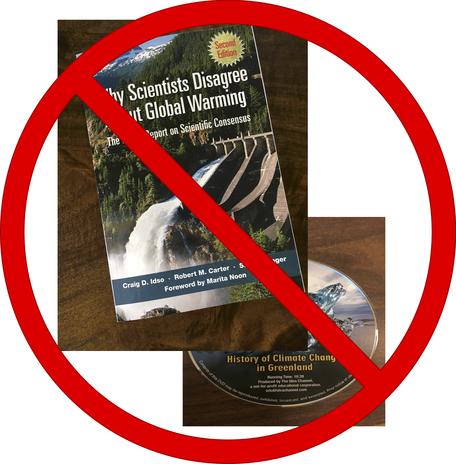 Provenance: March for Science
Reuse: If you wish to use this item outside this site in ways that exceed fair use (see http://fairuse.stanford.edu/) you must seek permission from its creator.
Building media literacy

In today's polarized discourse, many topics devolve into a 'battle of the sources,' with each side claiming the other's sources are rife with ideological slant. In the sciences, it's a little different, though, because we have the neutral arbiter of the peer-reviewed scientific literature. Nonetheless, some people conclude that scientists are biased and unethical. Ironically, these claims emanate from highly partisan, often inflammatory outlets.

So, how does one break the stalemate of the sources? It depends.

In a dialog, undermining someone else's sources is likely to make them dig into their argument even more fervently. Instead, use the conversational techniques described above to try to learn more about why a person feels as they do, make them feel heard, and explore for areas of agreement.

In class, teach media literacy skills to build a solid foundation for how students can evaluate the credibility of materials for themselves.