Provenance: Karin Kirk, Freelance Science Writer and Geoscientist
Reuse: This item is offered under a Creative Commons Attribution-NonCommercial-ShareAlike license http://creativecommons.org/licenses/by-nc-sa/3.0/ You may reuse this item for non-commercial purposes as long as you provide attribution and offer any derivative works under a similar license.
Teaching Climate Controversies: Lessons Learned from the CLEAN Climate Communications Workshop

Summary written by Karin Kirk, based on presentations at the 2012 workshop, Communicating Climate Science in the Classroom.

Controversial scientific issues are often closely tied to public policy, thus it is essential that educators respond with effective pedagogy for teaching controversy and strive to create a scientifically literate population. Climate change can be particularly challenging to teach and educators face several challenges:

This page presents some insights and tactics for teaching climate science, based on presentations at the 2012 Climate Communications workshop.

Public opinion research conducted by Anthony Lieserowitz and others has revealed that individuals perceive climate change in different ways. Their research identified 6 distinct types, termed "Global Warming's Six Americas" by Lieserowitz et al. (2009). The percentage of Americans in each of the Six Americas categories evolves over time and can reflect economic and political environment of the country.

The Alarmed are fully convinced of the reality and seriousness of climate change and are already taking individual, consumer, and political action to address it.

The Concerned – the largest of the six Americas – are also convinced that global warming is happening and a serious problem, but have not yet engaged the issue personally.

The Cautious are somewhat convinced that global warming is happening, but this belief is relatively weak, with many saying they could change their minds.

The Disengaged have hardly thought about global warming at all.They are not at all sure that global warming is happening and are the group most likely to say they could easily change their minds.

The Dismissive are sure that global warming is not happening. They are very certain about their views, saying they are very unlikely to change their minds about the issue and are actively involved as opponents of a national effort to reduce greenhouse gas emissions.

Which type do you fit into? Take the quiz.
See the full report: Global Warming's Six Americas

This is connected to classroom teaching because it reveals that people perceive the same information differently. Students do not process new information in a uniform way, rather new ideas are actively interpreted according to the existing knowledge and values of the listener. "The facts are actively interpreted by these different audiences, who construct their own mental models in accordance with what they "know", value, and feel. Knowledge is necessary, but insufficient." (Lieserowitz, 2010).

This means that when you present material about climate change to your class, it may be interpreted differently by different students. Thus it is worthwhile to know your audience and seek a pathway that encourages cognitive change. 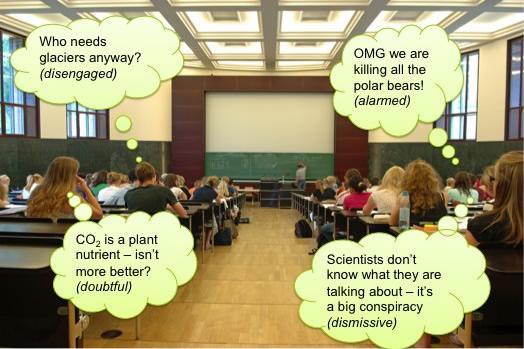 ×
Information is interpreted differently by different students, depending upon their own values, experiences and knowledge. Based on work by Leiserowitz et al.

Provenance: Karin Kirk, Freelance Science Writer and Geoscientist
Reuse: This item is offered under a Creative Commons Attribution-NonCommercial-ShareAlike license http://creativecommons.org/licenses/by-nc-sa/3.0/ You may reuse this item for non-commercial purposes as long as you provide attribution and offer any derivative works under a similar license.
Some examples:

Misconceptions are a fact of life in teaching, and play a significant role in teaching climate change because of the widespread occurrence of climate misconceptions (Leiserowitz et al., 2010). These misconceptions "lead some people to doubt that global warming is happening or that human activities are a major contributor, to misunderstand the cause and therefore the solutions, and to be unaware of the risks" (Leiserowitz, 2009).

Sometimes misconceptions make themselves apparent without any special prompting from the instructor, but there may well be more misconceptions than you realize. Many techniques can be used to uncover misconceptions, including:

To learn more about about techniques to understand student knowledge, see the On the Cutting Edge website about assessing student learning or the book Classroom Assessment Techniques by Angelo and Cross (1993) .

Show an example of a novice learner probe

Seven students argued about what they thought were major human causes of global warming. The following is what they identified as causes that could be attributed to humans:

Maria: acid rain
Natalia: burning coal
Tessa: the fuel we use in our cars
Blaine: using leaded gasoline instead of unleaded
Raul: the thinning of the Earth's ozone layer

Circle the name(s) of the student(s) you agree with. Explain why you agree.

Show an example of an undergraduate level probe

On the diagram below, label or describe how might human activities affect the carbon cycle. 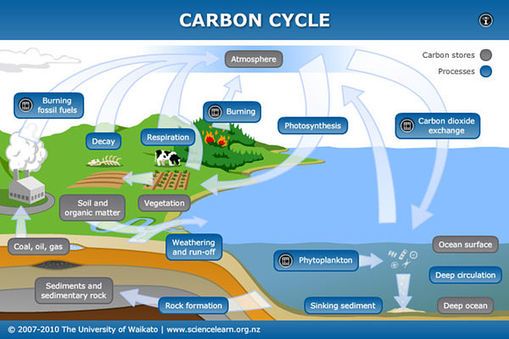 Image used with permission from the University of Waikato, New Zealand.

Some misconceptions are largely cognitive such as a misunderstanding of the role of the ozone layer. But misconceptions can be intertwined with one's worldview, such as the degree of anthropogenic forcing in the climate system. There is likely to be some overlap between both types of misconceptions.

It's important to understand the underlying cause of a student's misunderstanding so that you can take the best course to address it. A 'simple' cognitive misconception can be addressed using common pedagogies as described below. But worldview misconceptions are persistent and can actually be strengthened by traditional approaches (Nyhan and Reifler 2010). Read more about the worldview backfire effect below.

Suggestions from Susan Buhr include:

For explanations of these strategies and more information about misconceptions, see How Do I Get My Students Over Their Alternative Conceptions (Misconceptions) for Learning? by Joan Lucariello.

As has been described above, misconceptions are common, stem from multiple sources and are hard to correct. Some well-intentioned attempts to correct misinformation may actually serve to strengthen it. The Myth Debunking Handbook , by John Cook and Stephan Lewandowsky, provides insights and strategies for correcting misconceptions.

Repeating a misconception can unintentionally reinforce it. Instead, focus on the key scientific facts you wish to communicate. The fact sheet pictured at right was produced by the Centers for Disease Control and was intended to correct misconceptions about the flu vaccine. An experimental study found that some people had a diminished understanding about the vaccine 30 minutes after reading the flyer (Skurnik et al., 2005). The headlines in the flyer repeat common myths and therefore reinforced them. In a classroom setting, emphasize and underscore the key facts. Repeat these concepts often enough so that you increase your students' familiarity with them.

Deliberate misinformation can be packaged into tidy headlines, but scientists tend to respond with lengthy paragraphs. A simple myth is more cognitively attractive than an over-complicated correction (Schwarz et al., 2007).

As you prepare for teaching climate topics in class, think about the areas that are complex to explain. Strive to streamline your explanations while still keeping the science accurate. 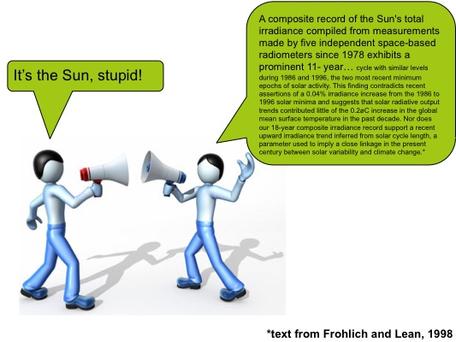 ×
Climate skeptics package their myths in tidy headlines, but scientists tend to respond with lengthy paragraphs.

Provenance: Image by Karin Kirk. Idea by John Cook.
Reuse: This item is offered under a Creative Commons Attribution-NonCommercial-ShareAlike license http://creativecommons.org/licenses/by-nc-sa/3.0/ You may reuse this item for non-commercial purposes as long as you provide attribution and offer any derivative works under a similar license. 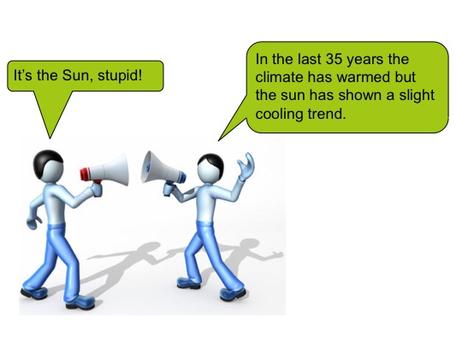 Provenance: Image by Karin Kirk. Idea by John Cook.
Reuse: This item is offered under a Creative Commons Attribution-NonCommercial-ShareAlike license http://creativecommons.org/licenses/by-nc-sa/3.0/ You may reuse this item for non-commercial purposes as long as you provide attribution and offer any derivative works under a similar license.
Tips from Skeptical Science:

The Skeptical Science website has a list of climate science "headlines" that present concise corrections for common myths.

When an issue is strongly tied to an individual's values, they are very reluctant to change their mind about it. Setting aside the matter of climate change for a moment, think about a philosophy with which you closely identify. Now, consider what it would take to reverse your opinion of that closely-held belief. More than likely, it would be difficult for you to change your mind, and rightfully so since this belief is related to your overall sense of values.

That is the worldview effect. The more you identify personally with an issue, the more resolute you are about it. In the case of climate change, there are several opportunities for worldview backfire effects. Where potential climate policy overlaps with worldviews on the role of government regulation, the economic impacts of steps to protect the environment, and the concept of cooperation among nations in an otherwise competitive economy.

Research has shown that attempts to correct misinformation that is in conflict with one's worldview can actually serve to reinforce it (Nyhan and Reifler, 2010). So where does that leave educators? Cook and Lewandowsky advise framing the topics in a way that it will not conflict with people's worldview. For example, a conservative audience was more accepting of climate science when nuclear power was presented as part of the solution (Kahan et al., 2007). In another example, the Global Warming's Six Americas study reveals considerable alignment between the dismissive group and the concerned group when asked about energy-saving measures (Leiserowitz, 2009).

Good practices when teaching controversy, from Susan Buhr, include:

For more information, see Teaching Controversial Issues from the On the Cutting Edge website about the affective domain.

Examples from the CLEAN collection

These three examples were used at the Climate Communication workshop as demonstrations of teaching activities that encompass active learning and deliberate communication about climate change.

Hide
Results from a national study of what Americans understand about how the climate system works, and the causes, impacts, and potential solutions to global warming. Among other findings, the study identifies a number of important gaps in public knowledge and common misconceptions about climate change.

Lucariello, J. How Do I Get My Students Over Their Alternative Conceptions (Misconceptions) for Learning? City University of New York.

Hide
This reference presents a range of specific pedagogic strategies for displacing misconceptions. Many of these ideas are well-suited to teaching climate science.