Test your energy awareness by answering the quiz questions below. Many of the answers contain links to references, datasets or spreadsheets that can be used to further explore these topics.

The information in this quiz has been reviewed by a scientist. Learn more about Teaching Energy Science » 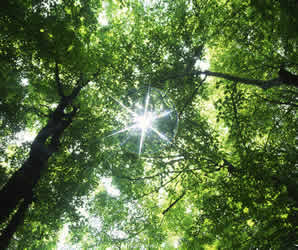 1.) Which forms of energy are ultimately derived from solar energy?

Biofuels derive energy from photosynthesis which is powered from the sun.
All fossil fuels can be thought of as "paleo-biofuels" and are a form of stored solar energy.
Wind energy is created by the uneven heating of the earth's surface, which is driven by solar input.


Nuclear energy is not derived from the sun. Nuclear energy comes from the energy released when atoms are split apart and some mass is converted to energy.

2.) About how much of the total energy use in the United States is supplied by renewable forms of energy?

×
Energy Information Administration graphic that shows the breakdown of energy use by different sources. This image is updated annually, and the current information can be found at https://www.eia.gov/energyexplained/us-energy-facts/

Provenance: US Energy Information Administration
Reuse: This item is in the public domain and maybe reused freely without restriction.
As of 2018, 11.5% of the US energy supply is supplied by renewable energy sources. This includes biomass, hydropower, wind, solar, and geothermal.

80% of the US energy supply comes from fossil fuels, while 8.6% is from nuclear energy.

If you consider only electricity generation instead of total energy, then renewables accounted for 17% of the total in 2018, according to the Energy Information Administration.


Learn more: US Energy Consumption by Source, from the US Energy Information Administration. Note that this link is updated with new statistics each year.

This question relates to Energy Literacy Principle 4: Various sources of energy can be used to power human activities.

3.) Which type of energy is expected make up the largest portion of the world's energy supply in the year 2040? 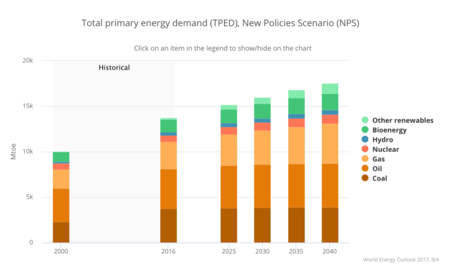 ×
Projections of energy use through 2040

Provenance: From the International Energy Agency, 2017
Reuse: This item is offered under a Creative Commons Attribution-NonCommercial-ShareAlike license http://creativecommons.org/licenses/by-nc-sa/3.0/ You may reuse this item for non-commercial purposes as long as you provide attribution and offer any derivative works under a similar license.
According to current projections, fossil fuels will continue to account for the largest source of energy worldwide. In 2016, fossil fuels made up 81% of the world's energy supply. By 2040, the share of fossil fuels is expected be to between 75% and 61%. Even though fossil fuel use is expected to decrease, the World Energy Outlook projects that fossil fuels will still comprise the lion's share of the world's energy.

This data is from the World Energy Outlook 2017 by the International Energy Agency. (Note that this link will automatically re-direct to the current year's energy outlook.)

Two pieces of context can help students understand these projections.

1. In order to limit global warming to 2 degrees C above pre-industrial levels, fossil fuel use needs to drop to near zero by 2040.

These projections illustrate the major challenge in trying to limit warming to 2 degrees C.

See teaching materials about trends in energy use.


4.) Many nations have a governmental standard for the average fuel economy of all new passenger automobiles sold, such as the US Corporate Average Fuel Economy (CAFE) standard. Which regions have the most stringent requirement for automobile fuel economy? 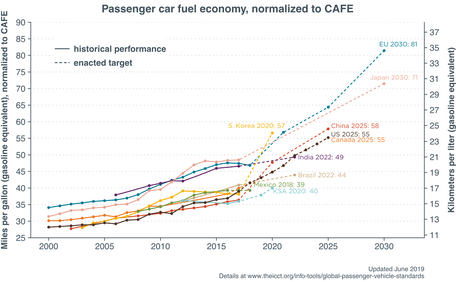 ×
A comparison of fuel economy standards for passenger cars from 8 different nations. This information is updated annually at: https://theicct.org/chart-library-passenger-vehicle-fuel-economy

Provenance: International Council on Clean Transportation
Reuse: This item is offered under a Creative Commons Attribution-NonCommercial-ShareAlike license http://creativecommons.org/licenses/by-nc-sa/3.0/ You may reuse this item for non-commercial purposes as long as you provide attribution and offer any derivative works under a similar license.

Japan, the European Union, and India lead the world in fuel economy with requirements between 46 mpg to 49 mpg for passenger cars.

In the the USA Corporate Average Fuel Economy (CAFE) standard is around 39 mpg (in 2017).

Most nations are raising fuel economy standards over time, with the US setting a goal of 55 mpg by 2025. However, as of 2020 the EPA is proposing rolling back fuel economy standards. This proposal would freeze the fuel economy standard to the 2021 target of 37 mpg (a combined target for cars and light trucks), rather than setting goals that continue to improve fuel economy over time. If these EPA rules were adopted, they would have other negative effects on fuel economy, such as taking away the ability for states like California to set their own, more stringent efficiency goals.


Source:
The International Council on Clean Transportation - information at this link is updated regularly.

More info:
Related analysis with interactive graphics: How U.S. Fuel Economy Standards Compare With the Rest of the World's from the New York Times, April 3, 2018.
CAFE Standards by the Department of Transportation

5.) The biggest use of energy in the typical US home is: 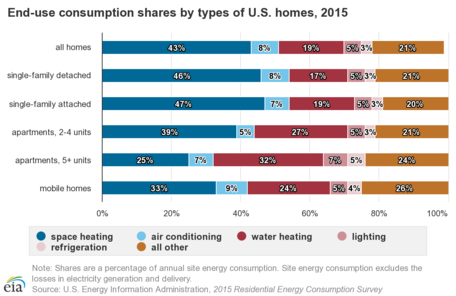 ×
Energy use in US homes, 2015. From https://www.eia.gov/energyexplained/use-of-energy/homes.php Data on the EIA page may be updated periodically.

Provenance: Image from the National Academy of Sciences http://needtoknow.nas.edu/energy/energy-use/home-work.php
Reuse: This item is offered under a Creative Commons Attribution-NonCommercial-ShareAlike license http://creativecommons.org/licenses/by-nc-sa/3.0/ You may reuse this item for non-commercial purposes as long as you provide attribution and offer any derivative works under a similar license.
According to the US Energy Information Administration, space heating uses the most household energy, consuming 43% of the total energy used in an average American home. Water heating is the next largest use, followed by air conditioning. (2015 data, and this page is updated periodically.)

Energy Use in Homes US Energy Information Administration


How we use Energy at Home and Work, from the National Academy of Sciences. Contains a useful graph of various energy uses in the home.

6.) If every American household replaced 3 incandescent light bulbs with LED light bulbs, how would US carbon dioxide emissions change? 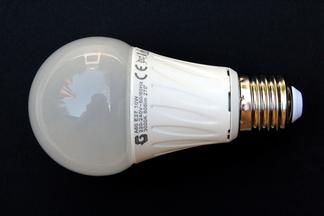 Provenance: Image by Zátonyi Sándor, from Wikimedia Commons
Reuse: This item is offered under a Creative Commons Attribution-NonCommercial-ShareAlike license http://creativecommons.org/licenses/by-nc-sa/3.0/ You may reuse this item for non-commercial purposes as long as you provide attribution and offer any derivative works under a similar license.

1.8% decrease in total US carbon dioxide emissions.
This example illustrates the usefulness of doing some basic calculations to quantify the benefit of this energy-saving measure.
A simple Excel worksheet is included below that shows the steps used to calculate this answer; the spreadsheet allows students to modify some of the variables to further investigate this topic.

7.) True or false: Wind turbines are a leading source of bird deaths 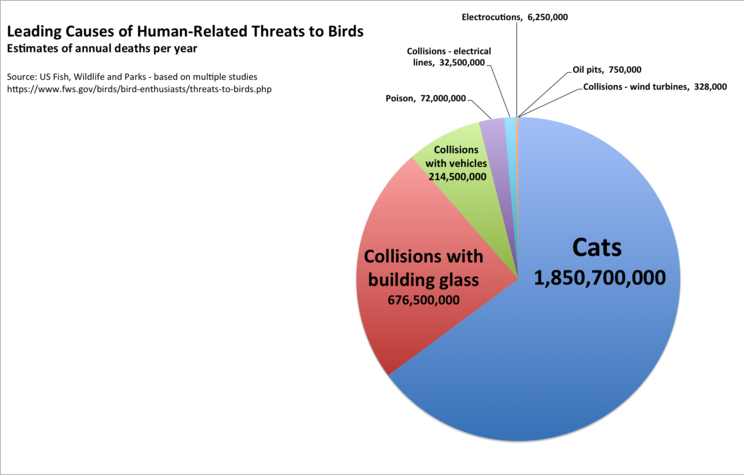 ×
Leading causes of human-related bird mortality in the US. Data from the US Fish and Wildlife Service, compiled from multiple studies.

Provenance: Karin Kirk, Freelance Science Writer and Geoscientist
Reuse: This item is offered under a Creative Commons Attribution-NonCommercial-ShareAlike license http://creativecommons.org/licenses/by-nc-sa/3.0/ You may reuse this item for non-commercial purposes as long as you provide attribution and offer any derivative works under a similar license.
False.

Cats are far and away the leading cause of 'unnatural' bird deaths, followed by collisions with buildings, vehicles, electrical lines, and communications towers. Wind turbine collisions are relatively small compared to these other threats. Nonetheless, the effect of wind turbines on bird populations is a serious problem that merits careful attention. But at the same time, it's important to consider the impact wind turbines alongside other threats and to prioritize bird health in many ways, such as protection of habitats and siting structures out of migratory paths and breeding areas.

As with many aspects of energy literacy, a quantitative approach can illuminate the scale of different problems.


Source:
Threats to Birds, by the US Fish & Wildlife Service, compiled from several studies.

This question relates to Energy Literacy Principle 7: The quality of life of individuals and societies (and birds!) is affected by energy choices. 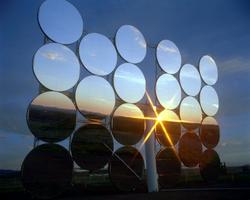 8.) Which single technology can provide our society with a seamless transition to cheap, safe and carbon-free energy?

None of the above.

There is no single "silver bullet" technology that will give us a simple transition to carbon-free energy for home heating, transportation, manufacturing and other large uses of energy. Every source of energy has its drawbacks and benefits, and a transition to new forms of energy will involve many different technologies, along with improvements in efficiency and changes in infrastructure.

The longer we wait to decarbonize our energy supply, the more challenging it will be to do so in time to avoid the worst effects of climate change. Transitioning to carbon-free energy is a high priority in some societies, but not all.

This question relates to Energy Literacy Principle 7: The quality of life of individuals and societies is affected by energy choices. 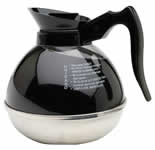 9.) What uses more energy? Six hours of laptop use or making coffee?


They are about the same.
A laptop uses 15-60 watts of electricity. The exact amount depends on the type of laptop and the intensity of the use such as how many programs are open, if a CD is spinning, or if the hard drive is in frequent use. Six hours of laptop use at 45 watts equals 270 watt-hours.
Making coffee can be accomplished by several methods. A typical coffee maker uses 900 watts of electricity and runs for approximately 15 minutes, yielding 225 watt-hours of energy demand. To make coffee on the stovetop, an electric burner uses 2500 watts and takes about 5 minutes to boil a kettle of water. This works out to be 208 watt-hours.

You can see all the variables and fiddle with the numbers yourself by using this coffee vs computer spreadsheet (Excel 2007 (.xlsx) 12kB Dec14 10).

Handy reference: How much electricity does my stuff use? by Michael Bluejay