I long for the day when low-income, black, Indigenous and people of color do not suffer disproportionately from the irresponsible stewardship that we all contribute to. 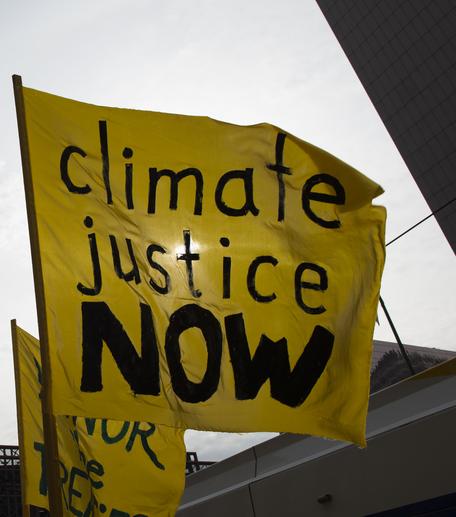 Provenance: Photo credit: Fibonacci Blue From Flickr.com: https://www.flickr.com/photos/fibonacciblue/30449764332
Reuse: This item is offered under a Creative Commons Attribution-NonCommercial-ShareAlike license http://creativecommons.org/licenses/by-nc-sa/3.0/ You may reuse this item for non-commercial purposes as long as you provide attribution and offer any derivative works under a similar license.

People from marginalized communities disproportionately feel the impacts of climate change as they often live in communities that experience more natural disasters, higher air pollution, or higher temperatures. Exposure to these hazards may lead to increased damage to or loss of infrastructure and homes, health issues and possibly even forced migration. Due to these disproportionate effects, climate justice should be at the center of every discussion about climate change and its impacts on health. Climate justice is not possible without racial justice.

Hide
Under-resourced and overburdened communities have fewer opportunities, training, and means to act in response to natural disasters, and often face political, social, and economic barriers to mitigating impacts and adapting to a changing climate. White people and those with more wealth are often able to secure more federal recovery aid after a natural disaster. Hurricane Katrina is one of many examples in which climate change has disproportionately impacted minority populations. In the aftermath of the hurricane, the mortality rate among African American residents of New Orleans was four times higher than that of white residents, and, due to lower insurance rates, the reconstruction and return rates to New Orleans in the first year among African Americans were much lower (42%) than of white people (70%). Navigation these challenges, in addition to the pain experienced through historical oppression, has led to people of color experiencing climate grief more deeply than white people.

Include diverse sets of voices, especially those most impacted

Hide
To successfully imagine a sustainable future and take collective climate action, a multitude of voices are needed including those of Black, Indigenous, Latinx, Asian and Pacific Islander communities that are already living through and adapting to a changing world.

Include other ways of knowing

Hide
Much of the science taught across the curriculum is based in Western scientific approaches. Incorporating other ways of knowing about the natural world, such as Traditional Ecological Knowledge, or Indigenous Knowledge refers to knowledge systems that Indigenous people have acquired over hundreds and thousands of years through their direct connection with the environment.