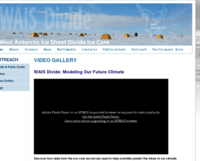 In this video, students see how data from the ice core record is used to help scientists predict the future of our climate. Video features ice cores extracted from the WAIS Divide, a research station on the West Antarctic Ice Sheet.