Jump to this Activity »
Greenhouse Gases: A Closer Look
https://www.explainingclimatechange.ca/lesson6/lesson6.html

King's Centre for Visualization in Science 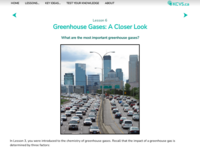 This lesson covers different aspects of the major greenhouse gases - water vapor, carbon dioxide, methane, nitrous oxides and CFCs - including some of the ways in which human activities are affecting the atmospheric concentrations of these key greenhouse gases. This is lesson six in a nine-lesson module about climate change.


Activity takes about one 50-minute class period or more.

HS-PS4-4: Evaluate the validity and reliability of claims in published materials of the effects that different frequencies of electromagnetic radiation have when absorbed by matter.

HS-C2.4:Changes in systems may have various causes that may not have equal effects.

HS-C3.1:The significance of a phenomenon is dependent on the scale, proportion, and quantity at which it occurs.

HS-P5.2:Use mathematical, computational, and/or algorithmic representations of phenomena or design solutions to describe and/or support claims and/or explanations.