Jump to this Activity »
What is the Future of Earth's Climate?
https://learn.concord.org/resources/1367/hasbot-what-is-the-future-of-earth-s-climate 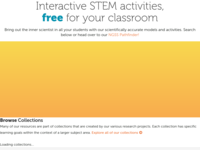 This is a series of 6 guided-inquiry activities that examine data and models that climate scientists use to attempt to answer the question of Earth's future climate.

The activities require about 45 min each.

5c
Observations, experiments, and theory are used to construct and refine computer models
About Teaching Principle 5
Other materials addressing 5c

MS-ESS2-6: Develop and use a model to describe how unequal heating and rotation of the Earth cause patterns of atmospheric and oceanic circulation that determine regional climates.

MS-ESS3-5:Ask questions to clarify evidence of the factors that have caused the rise in global temperatures over the past century.

MS-LS1-6: Construct a scientific explanation based on evidence for the role of photosynthesis in the cycling of matter and flow of energy into and out of organisms.

MS-PS3.A3:Temperature is a measure of the average kinetic energy of particles of matter. The relationship between the temperature and the total energy of a system depends on the types, states, and amounts of matter present.

MS-PS4.B2:The path that light travels can be traced as straight lines, except at surfaces between different transparent materials (e.g., air and water, air and glass) where the light path bends.

Systems and System Models, Stability and Change, Cause and effect
See Details »

hide
Systems and System Models, Stability and Change, Cause and effect

MS-C7.3:Stability might be disturbed either by sudden events or gradual changes that accumulate over time.

MS-C7.4:Systems in dynamic equilibrium are stable due to a balance of feedback mechanisms.

MS-P1.2:ask questions to identify and/or clarify evidence and/or the premise(s) of an argument.

MS-P1.4:Ask questions to clarify and/or refine a model, an explanation, or an engineering problem.

MS-P2.1:Evaluate limitations of a model for a proposed object or tool.

MS-P2.3:Use and/or develop a model of simple systems with uncertain and less predictable factors.

MS-P2.4:Develop and/or revise a model to show the relationships among variables, including those that are not observable but predict observable phenomena.

MS-P2.5:Develop and/or use a model to predict and/or describe phenomena.

MS-P2.7:Develop and/or use a model to generate data to test ideas about phenomena in natural or designed systems, including those representing inputs and outputs, and those at unobservable scales.

MS-P6.1:Construct an explanation that includes qualitative or quantitative relationships between variables that predict(s) and/or describe(s) phenomena.

HS-ESS2-6: Develop a quantitative model to describe the cycling of carbon among the hydrosphere, atmosphere, geosphere, and biosphere.

HS-PS3.A1:Energy is a quantitative property of a system that depends on the motion and interactions of matter and radiation within that system. That there is a single quantity called energy is due to the fact that a system’s total energy is conserved, even as, within the system, energy is continually transferred from one object to another and between its various possible forms.

HS-PS4.A1:The wavelength and frequency of a wave are related to one another by the speed of travel of the wave, which depends on the type of wave and the medium through which it is passing.

Patterns, Cause and effect, Systems and System Models, Stability and Change
See Details »

hide
Patterns, Cause and effect, Systems and System Models, Stability and Change

HS-C4.1:Systems can be designed to do specific tasks.

HS-P1.2:ask questions that arise from examining models or a theory, to clarify and/or seek additional information and relationships.

HS-P1.4:ask questions to clarify and refine a model, an explanation, or an engineering problem

HS-P2.2:Design a test of a model to ascertain its reliability.

HS-P2.3:Develop, revise, and/or use a model based on evidence to illustrate and/or predict the relationships between systems or between components of a system

HS-P6.4:Apply scientific reasoning, theory, and/or models to link evidence to the claims to assess the extent to which the reasoning and data support the explanation or conclusion.