Jump to this Video »
It's Us
https://www.youtube.com/watch?v=-PrrTk6DqzE&t=13s 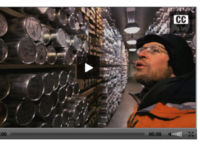 This video segment from 'Earth: The Operators' Manual' explores how we know that today’s increased levels of CO2 are caused by humans burning fossil fuels and not by some natural process, such as volcanic out-gassing. Climate scientist Richard Alley provides a detailed step-by-step explanation that examines the physics and chemistry of different “flavors,” or isotopes, of carbon in Earth’s atmosphere.

MS-ESS2.A1:All Earth processes are the result of energy flowing and matter cycling within and among the planet’s systems. This energy is derived from the sun and Earth’s hot interior. The energy that flows and matter that cycles produce chemical and physical changes in Earth’s materials and living organisms.