Jump to this Activity »
Using the Very, Very Simple Climate Model in the Classroom
https://scied.ucar.edu/activity/very-simple-climate-model-activity 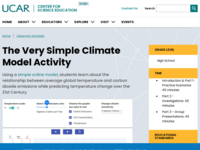 MS-C3.3: Proportional relationships (e.g., speed as the ratio of distance traveled to time taken) among different types of quantities provide information about the magnitude of properties and processes.

MS-P6.5: Apply scientific reasoning to show why the data or evidence is adequate for the explanation or conclusion

MS-P8.2: Integrate qualitative and/or quantitative scientific and/or technical information in written text with that contained in media and visual displays to clarify claims and findings.

HS-P8.2: Compare, integrate and evaluate sources of information presented in different media or formats (e.g., visually, quantitatively) as well as in words in order to address a scientific question or solve a problem.

HS-P8.5: Communicate scientific and/or technical information or ideas (e.g. about phenomena and/or the process of development and the design and performance of a proposed process or system) in multiple formats (i.e., orally, graphically, textually, mathematically).

Entered the Collection: Last Reviewed:
Jump to this Activity »