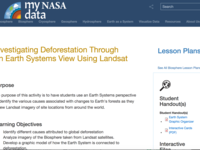 This activity has students use an Earth Systems perspective to identify the various causes associated with changes to Earth's forests as they review Landsat imagery of site locations from around the world.

MS-ESS3-4: Construct an argument supported by evidence for how increases in human population and per-capita consumption of natural resources impact Earth's systems.

MS-ESS3.C2: Typically as human populations and per-capita consumption of natural resources increase, so do the negative impacts on Earth unless the activities and technologies involved are engineered otherwise.

Stability and Change, Patterns, Cause and effect, Scale, Proportion and Quantity
See Details »

hide
Stability and Change, Patterns, Cause and effect, Scale, Proportion and Quantity

MS-C2.3: Phenomena may have more than one cause, and some cause and effect relationships in systems can only be described using probability.

MS-P6.4: Apply scientific ideas, principles, and/or evidence to construct, revise and/or use an explanation for real- world phenomena, examples, or events.

MS-P7: Engaging in Argument from Evidence