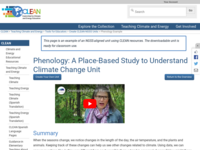 This collection of learning activities allows students to explore phenology, phenological changes over time, and how these changes fit into the larger context of climate change. Students explore patterns of solar radiation and seasons as well as phenological cycles and ecological affects of these patterns.

This series of 20 learning activities each take one 45 minute class period.

See how this Curricula supports the Next Generation Science Standards»

See how this Curricula supports the Next Generation Science Standards»

MS-ESS1-1: Develop and use a model of the Earth-sun-moon system to describe the cyclic patterns of lunar phases, eclipses of the sun and moon, and seasons.

MS-ESS3-5: Ask questions to clarify evidence of the factors that have caused the rise in global temperatures over the past century.

MS-ESS1.A1: Patterns of the apparent motion of the sun, the moon, and stars in the sky can be observed, described, predicted, and explained with models.

MS-P1.2: ask questions to identify and/or clarify evidence and/or the premise(s) of an argument.

This Curricula builds on the following concepts of Climate Literacy.

This Curricula builds on the following concepts of Energy Literacy.

Jump to this Curricula »