Changing Climates project at Colorado State University UCAR with portions from Windows to the Universe, UCAR Center for Science Education 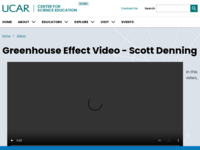 In this short video, atmospheric scientist Scott Denning gives a candid and entertaining explanation of how greenhouse gases in Earth's atmosphere warm our planet.