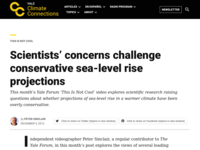 This video considers the current estimates of sea level rise as possibly too conservative and discusses more recent data on ice melt rates coming from Antarctica and Greenland, showing rates of melt at up to 5 times as rapid. Scientists discuss what levels and rates of sea level rise have occurred in the past, including the Pliocene, which demonstrated 1m rise every 20 years.

5c
Observations, experiments, and theory are used to construct and refine computer models
About Teaching Principle 5
Other materials addressing 5c

MS-ESS2.C3:Global movements of water and its changes in form are propelled by sunlight and gravity.

HS-ESS3.D2:Through computer simulations and other studies, important discoveries are still being made about how the ocean, the atmosphere, and the biosphere interact and are modified in response to human activities.