Jump to this Activity »
Climate Change and the Oceans
https://explainingclimatechange.com/lesson8/lesson8.html

The King's Centre for Visualization in Science 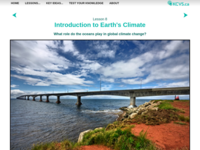 This activity covers the role that the oceans may play in climate change and how climate change may affect the oceans. It is lesson 8 in a nine-lesson module Visualizing and Understanding the Science of Climate Change.


Activity takes about one to two 50-minute class periods.

HS-LS2-6: Evaluate the claims, evidence, and reasoning that the complex interactions in ecosystems maintain relatively consistent numbers and types of organisms in stable conditions, but changing conditions may result in a new ecosystem.

HS-PS1-5: Apply scientific principles and evidence to provide an explanation about the effects of changing the temperature or concentration of the reacting particles on the rate at which a reaction occurs

HS-PS1.B2: In many situations, a dynamic and condition-dependent balance between a reaction and the reverse reaction determines the numbers of all types of molecules present.

HS-PS1.B3: The fact that atoms are conserved, together with knowledge of the chemical properties of the elements involved, can be used to describe and predict chemical reactions.