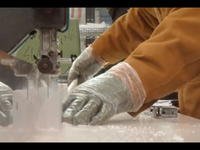 This video features research conducted at University of Colorado's Institute of Arctic and Alpine Research, which studies isotopes of hydrogen trapped in ice cores to understand climate changes in the past.

MS-C1.1: Macroscopic patterns are related to the nature of microscopic and atomic-level structure.