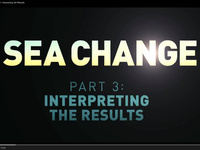 This video is the third in a three-part series by the Sea Change project, about scientists' search for Pleiocene beaches in Australia and elsewhere to establish sea level height during Earth's most recent previous warm period. This segment features the research of Jerry Mitrovica, Harvard geophysicist.