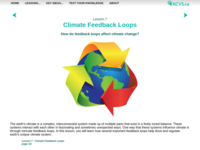 This is the seventh of nine lessons in the 'Visualizing and Understanding the Science of Climate Change' website. This lesson addresses climate feedback loops and how these loops help drive and regulate Earth's unique climate system.

Activity takes about 1 to 2 fifty-minute class periods or could be done as a homework assignment.

Home page for Visualizing and Understanding the Science of Climate Change is here http://www.explainingclimatechange.ca/Climate%20Change/Lessons/lessons.html

HS-ESS2-2: Analyze geoscience data to make the claim that one change to Earth's surface can create feedbacks that cause changes to other Earth systems.

HS-LS2.A1:Ecosystems have carrying capacities, which are limits to the numbers of organisms and populations they can support. These limits result from such factors as the availability of living and nonliving resources and from such challenges such as predation, competition, and disease. Organisms would have the capacity to produce populations of great size were it not for the fact that environments and resources are finite. This fundamental tension affects the abundance (number of individuals) of species in any given ecosystem.

HS-C3.1:The significance of a phenomenon is dependent on the scale, proportion, and quantity at which it occurs.

HS-P2.6:Develop and/or use a model (including mathematical and computational) to generate data to support explanations, predict phenomena, analyze systems, and/or solve problems.