Jump to this Video »
The Effects of Atmospheric Particles on Climate
http://www.pbslearningmedia.org/resource/ttv10.sci.ess.watcyc.aerosols/ 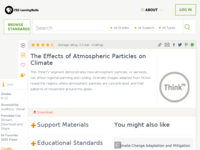 This video illustrates how atmospheric particles, or aerosols (such as black carbon, sulfates, dust, fog), can affect the energy balance of Earth regionally, and the implications for surface temperature warming and cooling. Learn more about Teaching Climate Literacy and Energy Awareness»

HS-PS4.A1: The wavelength and frequency of a wave are related to one another by the speed of travel of the wave, which depends on the type of wave and the medium through which it is passing.

Entered the Collection: Last Reviewed:
Jump to this Video »