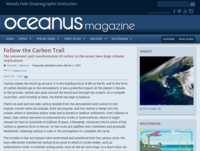 This interactive follows carbon as it moves through various components of the carbon cycle. Learn more about Teaching Climate Literacy and Energy Awareness»