Jump to this Video »
Plant for the Planet
https://www.youngvoicesfortheplanet.com/youth-climate-videos/plant-for-planet/

Young Voices for the Planet 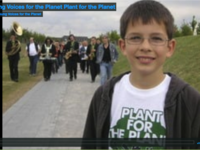 This video describes the foundation Plant for the Planet, a foundation created by a 9-year-old German boy, Felix. This foundation has planted more than 500,000 trees in Germany, which he says help sequester carbon and reduce greenhouse gas emissions. The student rallies, first his community and then other children, to plant millions of trees to offset our energy-use emissions.