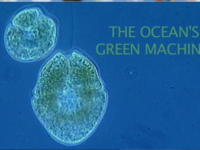 This video introduces phytoplankton - the base of the marine food web, the source of half of the oxygen on Earth, and an important remover of CO2 from the atmosphere. The video also explains how satellites are used to monitor phytoplankton and how warming waters and acidification negatively affect phytoplankton.

MS-LS2.B1: Food webs are models that demonstrate how matter and energy is transferred between producers, consumers, and decomposers as the three groups interact within an ecosystem. Transfers of matter into and out of the physical environment occur at every level. Decomposers recycle nutrients from dead plant or animal matter back to the soil in terrestrial environments or to the water in aquatic environments. The atoms that make up the organisms in an ecosystem are cycled repeatedly between the living and nonliving parts of the ecosystem.

HS-LS1.C2: The sugar molecules thus formed contain carbon, hydrogen, and oxygen: their hydrocarbon backbones are used to make amino acids and other carbon-based molecules that can be assembled into larger molecules (such as proteins or DNA), used for example to form new cells. (

HS-LS2.B2: Plants or algae form the lowest level of the food web. At each link upward in a food web, only a small fraction of the matter consumed at the lower level is transferred upward, to produce growth and release energy in cellular respiration at the higher level. Given this inefficiency, there are generally fewer organisms at higher levels of a food web. Some matter reacts to release energy for life functions, some matter is stored in newly made structures, and much is discarded. The chemical elements that make up the molecules of organisms pass through food webs and into and out of the atmosphere and soil, and they are combined and recombined in different ways. At each link in an ecosystem, matter and energy are conserved.