Jump to this Video »
Earth as a System
https://rmpbs.pbslearningmedia.org/resource/ess05.sci.ess.earthsys.hologlobe/earth-as-a-system/#.Wvn-2Yoh2Uk 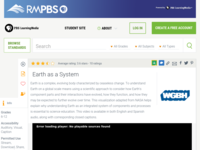 This short video uses animated imagery from satellite remote sensing systems to illustrate that Earth is a complex, evolving body characterized by ceaseless change. Adapted from NASA, this visualization helps explain why understanding Earth as an integrated system of components and processes is essential to science education.

HS-ESS2.A2: Evidence from deep probes and seismic waves, reconstructions of historical changes in Earth’s surface and its magnetic field, and an understanding of physical and chemical processes lead to a model of Earth with a hot but solid inner core, a liquid outer core, a solid mantle and crust. Motions of the mantle and its plates occur primarily through thermal convection, which involves the cycling of matter due to the outward flow of energy from Earth’s interior and gravitational movement of denser materials toward the interior.