Jump to this Video »
Inuit Observations of Climate Change
http://www.pbslearningmedia.org/resource/ipy07.sci.ess.watcyc.inuitobserv/ 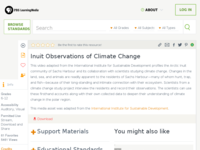 This video features changes in the land, sea, and animals that are being observed by the residents of Sachs Harbour, Northwest Territories, Canada — many of whom hunt, trap, and fish—because of their long-standing and intimate connection with their ecosystem. Scientists interview the residents and record their observations in order to deepen our understanding of climate change in the polar region. Background essay and discussion questions are included.