Jump to this Video »
The Ecology of Climate Change
https://www.amnh.org/explore/videos/earth-and-climate/climate-change-alaska 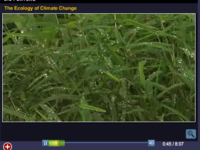 This video focuses on the conifer forest in Alaska to explore the carbon cycle and how the forest responds to rising atmospheric carbon dioxide. Topics addressed in the video include wildfires, reflectivity, and the role of permafrost in the global carbon cycle.

Simplified climate models, such as this one from Windows to the Universe, may complement the video and related discussion: http://www.windows2universe.org/earth/climate/cli_model.html