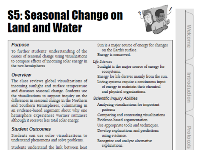 In this worksheet-based activity, students review global visualizations of incoming sunlight and surface temperature and discuss seasonal change. Students use the visualizations to support inquiry on the differences in seasonal change in the Northern and Southern Hemispheres and how land and water absorb and release heat differently. The activity culminates in an argument about why one hemisphere experiences warmer summers although it receives less total solar energy.

MS-ESS2-6: Develop and use a model to describe how unequal heating and rotation of the Earth cause patterns of atmospheric and oceanic circulation that determine regional climates.

MS-P2.4: Develop and/or revise a model to show the relationships among variables, including those that are not observable but predict observable phenomena.

MS-P6.4: Apply scientific ideas, principles, and/or evidence to construct, revise and/or use an explanation for real- world phenomena, examples, or events.

MS-P6.5: Apply scientific reasoning to show why the data or evidence is adequate for the explanation or conclusion