Skip to Main ContentSkip to Navigation
Your Account
Author Profile

Recommended instructional strategies for teaching with this activity:

This activity can help to dislodge the following misconceptions:

I suggest playing The Externalities Game (or TEG for short) to supplement this activity. It may work well as a warm-up to the climate negotiation simulation discussed above.

Show more about The Externalities Game

Hide
TEG is a game designed by my advisors and I at ASU (and funded by NSF) to teach students about environmental externalities. It allows students to experience the tension between individual interests and group benefit, the key to the climate change problem (and other collective action problems). Before playing the game, students are primed through some introductory reading assignments Intro to Game Theory, Collective Action, CLimate Change (Microsoft Word 2007 (.docx) 526kB Apr9 12) and are given the game-rules TEG Rules (Microsoft Word 2007 (.docx) 18kB Apr9 12) and the 'game calculator' TEG Game Calculator (Excel 2007 (.xlsx) 17kB Apr9 12) to experiment with before class time. A summary lecture can also be given prior to game-play. 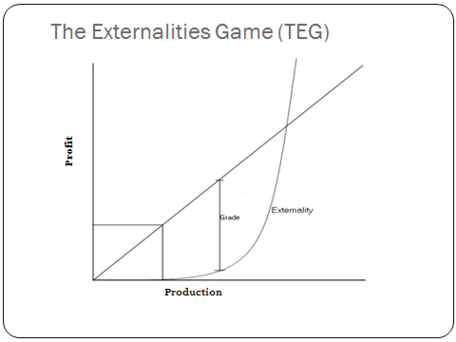 Provenance: Susan Spierre, Arizona State University at the Tempe Campus
Reuse: This item is offered under a Creative Commons Attribution-NonCommercial-ShareAlike license http://creativecommons.org/licenses/by-nc-sa/3.0/ You may reuse this item for non-commercial purposes as long as you provide attribution and offer any derivative works under a similar license.

Each student decides how many units they want to produce, the numbers are entered into the game calculator (which is a simple worksheet in excel) and each student gets a grade. Decisions are made by the players are confidential, so students can lie and cheat and make a decision that will benefit them but hurt the group.

The students can strategize and cooperate so that everyone can earn an A but if only a few students act independently and try to earn themselves a very high grade, the entire system can collapse and most players will earn very poor grades, and a few selfish players will earn very high grades. After the resulting grades are revealed to the class, the students then have an opportunity to share points. Students will low grades can plea to others with high grades for points. At the end of the sharing round, the students end up with a final grade that we incorporate into our class grading scheme. It usually ends up being a quiz grade, nothing that will really affect their overall grades that much but enough to make students be invested in the game outcome.

Most of the learning and the climate policy lessons occur in the reflection stage, during class discussions about what happened during game-play. The instructor can make the association between the different player roles and different countries: The luxury players represent developed countries, the intermediate players are the rapidly developing countries and the subsistence are the slowly developing countries. There are plenty of ways to talk about how the game simulates international climate negotiations because each player has their own interests in the game that comes at the expense of others. The students see the difficulty of creating an international mitigation policy. I like to discuss how in real negotiations, the transaction costs in cooperation and collective action are much higher, since political leaders speak different languages, represent competing economic and cultural interests, and have different ideas about the proper way forward. Sometimes we assign writing assignments that allow students to reflect on their game-play experience and to make these connections between the game and real climate negotiations.