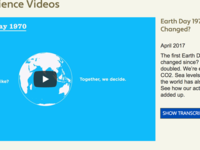 This video illustrates the environmental challenges and achievements since Earth Day was established in 1970. It can be used as an extension or engagement resource. However, it would need to be carefully framed with the objectives of the lesson.

MS-ESS3.C2: Typically as human populations and per-capita consumption of natural resources increase, so do the negative impacts on Earth unless the activities and technologies involved are engineered otherwise.