Jump to this Video »
A guide to the energy of the Earth
http://ed.ted.com/lessons/a-guide-to-the-energy-of-the-earth-joshua-m-sneideman 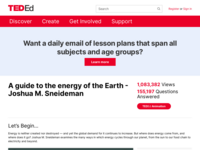 This animated video outlines Earth's energy. The video presents a progression from identifying the different energy systems to the differences between external and internal energy sources and how that energy is cycled and used.

MS-LS2.B1: Food webs are models that demonstrate how matter and energy is transferred between producers, consumers, and decomposers as the three groups interact within an ecosystem. Transfers of matter into and out of the physical environment occur at every level. Decomposers recycle nutrients from dead plant or animal matter back to the soil in terrestrial environments or to the water in aquatic environments. The atoms that make up the organisms in an ecosystem are cycled repeatedly between the living and nonliving parts of the ecosystem.

HS-ESS2.A2: Evidence from deep probes and seismic waves, reconstructions of historical changes in Earth’s surface and its magnetic field, and an understanding of physical and chemical processes lead to a model of Earth with a hot but solid inner core, a liquid outer core, a solid mantle and crust. Motions of the mantle and its plates occur primarily through thermal convection, which involves the cycling of matter due to the outward flow of energy from Earth’s interior and gravitational movement of denser materials toward the interior.

HS-ESS2.B1: The radioactive decay of unstable isotopes continually generates new energy within Earth’s crust and mantle, providing the primary source of the heat that drives mantle convection. Plate tectonics can be viewed as the surface expression of mantle convection.

HS-LS2.B2: Plants or algae form the lowest level of the food web. At each link upward in a food web, only a small fraction of the matter consumed at the lower level is transferred upward, to produce growth and release energy in cellular respiration at the higher level. Given this inefficiency, there are generally fewer organisms at higher levels of a food web. Some matter reacts to release energy for life functions, some matter is stored in newly made structures, and much is discarded. The chemical elements that make up the molecules of organisms pass through food webs and into and out of the atmosphere and soil, and they are combined and recombined in different ways. At each link in an ecosystem, matter and energy are conserved.

HS-PS3.B1: Conservation of energy means that the total change of energy in any system is always equal to the total energy transferred into or out of the system.