Lisa Gardiner, Windows to the Universe 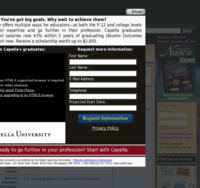 In this short but effective demonstration/experiment, students investigate how thermal expansion of water might affect sea level.


Experiment will take one class period.

Another version of the activity is here: https://scied.ucar.edu/activity/thermal-expanson-seawater

Next Generation Science Standards See how this Short Demonstration/Experiment supports:

MS-PS1.A3:Gases and liquids are made of molecules or inert atoms that are moving about relative to each other.

MS-C1.1:Macroscopic patterns are related to the nature of microscopic and atomic-level structure.

MS-C3.1:Time, space, and energy phenomena can be observed at various scales using models to study systems that are too large or too small.

MS-P2.1:Evaluate limitations of a model for a proposed object or tool.

MS-P3.4:Collect data to produce data to serve as the basis for evidence to answer scientific questions or test design solutions under a range of conditions

HS-P2.6:Develop and/or use a model (including mathematical and computational) to generate data to support explanations, predict phenomena, analyze systems, and/or solve problems.

Jump to this Short Demonstration/Experiment »