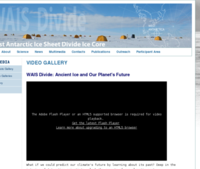 This short video describes how the compression of Antarctic snow into ice captures air from past atmospheres. It shows how ice cores are drilled from the Antarctic ice and prepared for shipment and subsequent analysis.

HS-ESS2.A3:The geological record shows that changes to global and regional climate can be caused by interactions among changes in the sun’s energy output or Earth’s orbit, tectonic events, ocean circulation, volcanic activity, glaciers, vegetation, and human activities. These changes can occur on a variety of time scales from sudden (e.g., volcanic ash clouds) to intermediate (ice ages) to very long-term tectonic cycles.