Jump to this Video »
From Mud to Molecules: What Deep Sea Sediments Can Tell Us About Past Climates
http://www.youtube.com/watch?v=EyUMpk3yRAk 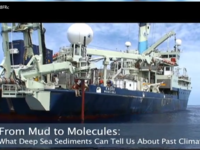