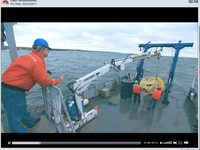 The video addresses impact of warming temperatures on major lakes of the world with specific focus on Lake Superior and Lake Tanganyika. It discusses the science of water stratification and its impact on lake ecosystems and on human populations whose livelihoods depend on the lakes.

US Great Lakes
See more for this region.