Jump to this Static Visualization »
What Is Ocean Acidification?
http://www.pmel.noaa.gov/co2/story/What+is+Ocean+Acidification%3F 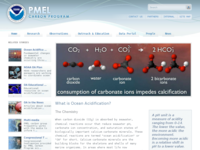 This is the NOAA overview page on ocean acidification: http://www.pmel.noaa.gov/co2/story/Ocean+Acidification

MS-PS1.B1:Substances react chemically in characteristic ways. In a chemical process, the atoms that make up the original substances are regrouped into different molecules, and these new substances have different properties from those of the reactants.

HS-PS1.B2:In many situations, a dynamic and condition-dependent balance between a reaction and the reverse reaction determines the numbers of all types of molecules present.