Jump to this Static Visualization »
Images of Change
http://climate.nasa.gov/stateOfFlux/index.cfm 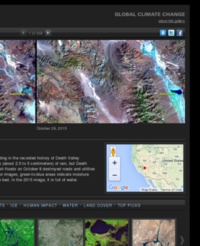 This collection of photos from the NASA Climate website features images of global change, such as floods, wildfires, and retreating glaciers. Not all images show change caused directly by climate change and energy use, and descriptive captions indicate causes for change in most of the images. Learn more about Teaching Climate Literacy and Energy Awareness»

MS-ESS2.C5: Water’s movements—both on the land and underground—cause weathering and erosion, which change the land’s surface features and create underground formations.

Stability and Change, Patterns, Cause and effect, Scale, Proportion and Quantity
See Details »

hide
Stability and Change, Patterns, Cause and effect, Scale, Proportion and Quantity

MS-C3.2: The observed function of natural and designed systems may change with scale.

MS-C3.3: Proportional relationships (e.g., speed as the ratio of distance traveled to time taken) among different types of quantities provide information about the magnitude of properties and processes.

MS-C3.5: Phenomena that can be observed at one scale may not be observable at another scale.

Patterns, Cause and effect, Scale, Proportion and Quantity, Stability and Change
See Details »

hide
Patterns, Cause and effect, Scale, Proportion and Quantity, Stability and Change

HS-C1.2: Classifications or explanations used at one scale may fail or need revision when information from smaller or larger scales is introduced; thus requiring improved investigations and experiments.

HS-C3.1: The significance of a phenomenon is dependent on the scale, proportion, and quantity at which it occurs.

HS-C3.3: Patterns observable at one scale may not be observable or exist at other scales.

This Static Visualization builds on the following concepts of Climate Literacy.

http://climate.nasa.gov/
Jump to this Static Visualization »