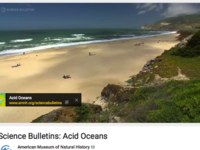 This video follows biologist Gretchen Hofmann as she studies the effects of ocean acidification on sea urchin larvae.