Jump to this Video »
Tree Rings: Counting the Years of Global Warming
http://www.youtube.com/watch?v=vqicp4PvHrY 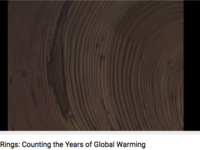 This video describes the role that dendrochronology plays in understanding climate change, especially changes to high elevation environments at an upper tree line. Dendrochronologists from the Big Sky Institute sample living and dead trees, describe how correlations between trees are made, and explain how tree cores record climate changes.

MS-LS4.C1: Adaptation by natural selection acting over generations is one important process by which species change over time in response to changes in environmental conditions. Traits that support successful survival and reproduction in the new environment become more common; those that do not become less common. Thus, the distribution of traits in a population changes.

hide
Planning and Carrying Out Investigations