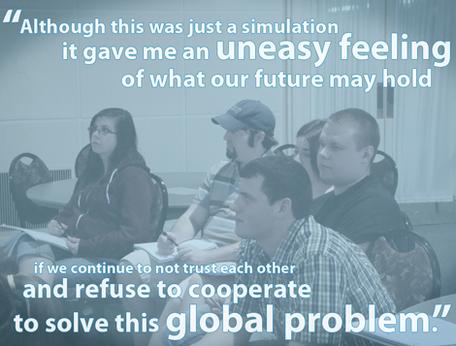 World Climate: a simulation game based on the international climate negotiations

Simulation role-playing games provide a means not only for actively learning, but also for learning in a social context. This feature is critical for understanding the dynamics of human systems charged with responding to the climate change challenge.

We have found that simulation role-playing game, World Climate, developed by Climate Interactive and modified by our group, offers an excellent way to enable student learning about climate change and the human systems linked to it.

Like all complex systems, climate change represents a dynamic system with many stocks and flows, nonlinear processes, feedbacks, time delays, and non-intuitive behaviors. Misconceptions, or flawed mental models, about climate change projections, impacts, and causes are widespread and are often deeply entrenched.


Rather than delivering information through conventional pedagogical approaches, simulation games provide a means for learners to test their assumptions and find out for themselves how the system responds. This approach essentially mirrors how scientists learn about climate change and other complex systems by:

The World Climate exercise was developed by Climate Interactive and modified by our team (as seen in this video). The game is described in a forthcoming paper by Sterman et al. and the simulation (C-ROADS, or Climate Rapid Overview and Decision Support) and facilitation materials are and can be downloaded at Climate Interactive's website.

C-ROADS and its web-based counterpart, C-Learn, are state-of-the-art, scientifically reviewed simulations that enable users to determine the effect of different emissions pathways on global temperature and sea level rise within the speed of a conversation. Participants play the role of delegates in an international climate negotiation charged with achieving the global accord's goal of a less than 2 ˚C temperature rise over pre-industrial times.

The current version of World Climate focuses on the dynamics of the international climate negotiations, in which the principle of "common but differentiated responsibility" of different nations is a core feature. However, at least as pertinent to today's youth and future generations is the differentiated responsibility among generations, where younger and future generations have contributed less to the current stock of greenhouse gases, yet will bear a greater burden of climate change impacts and mitigation. In partnership with Climate Interactive , we are currently developing a new game that will explore the time delays inherent in the climate system and the impact of those delays on young and future generations.