Jump to this Activity »
Responding to Climate Change
https://www.explainingclimatechange.ca/lesson9/lesson9.html

King's Centre for Visualization in Science 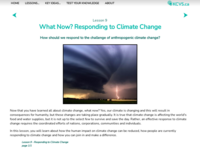 This is the ninth and final lesson in a series of lessons about climate change. This lesson focuses on the various activities that humans can do to mitigate the effects of climate change. This includes information on current and predicted CO2 emission scenarios across the globe, alternative energy sources, and how people are currently responding to climate change. Importantly, this lesson is motivating in showing students that they can make a difference.

HS-ESS3-4: Evaluate or refine a technological solution that reduces impacts of human activities on natural systems.

HS-ESS3.B1: Natural hazards and other geologic events have shaped the course of human history; [they] have significantly altered the sizes of human populations and have driven human migrations.

Patterns, Cause and effect, Scale, Proportion and Quantity, Systems and System Models, Energy and Matter, Structure and Function, Stability and Change
See Details »

hide
Patterns, Cause and effect, Scale, Proportion and Quantity, Systems and System Models, Energy and Matter, Structure and Function, Stability and Change

HS-C1.2: Classifications or explanations used at one scale may fail or need revision when information from smaller or larger scales is introduced; thus requiring improved investigations and experiments.

HS-C6.1: Investigating or designing new systems or structures requires a detailed examination of the properties of different materials, the structures of different components, and connections of components to reveal its function and/or solve a problem.

HS-C7.4: Systems can be designed for greater or lesser stability.