Jump to this Activity »
Why fly south? How climate change alters the phenology of plants and animals
http://kbsgk12project.kbs.msu.edu/blog/2012/11/06/why-fly-south-how-climate-change-alters-the-phenology-of-plants-and-animals/ 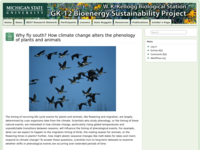 This activity introduces students to plotting and analyzing phenology data. Students use 30 years of data that shows the date of the first lilac bloom and the number of days of ice cover of nearby Gull Lake.

This activity could be completed in two half-hour discussion periods with graphs being completed at home or in class.

MS-LS2.A1: Organisms, and populations of organisms, are dependent on their environmental interactions both with other living things and with nonliving factors.

MS-C3.2: The observed function of natural and designed systems may change with scale.

MS-C3.4: Scientific relationships can be represented through the use of algebraic expressions and equations.

MS-P2.5: Develop and/or use a model to predict and/or describe phenomena.

MS-P8.1: Critically read scientific texts adapted for classroom use to determine the central ideas and/or obtain scientific and/or technical information to describe patterns in and/or evidence about the natural and designed world(s).

HS-ESS2-7: Construct an argument based on evidence about the simultaneous coevolution of Earth’s systems and life on Earth.

HS-LS2-2: Use mathematical representations to support and revise explanations based on evidence about factors affecting biodiversity and populations in ecosystems of different scales.

HS-P5.1: Create and/or revise a computational model or simulation of a phenomenon, designed device, process, or system.

HS-P5.4: Use simple limit cases to test mathematical expressions, computer programs, algorithms, or simulations of a process or system to see if a model “makes sense” by comparing the outcomes with what is known about the real world.

HS-P8.1: Critically read scientific literature adapted for classroom use to determine the central ideas or conclusions and/or to obtain scientific and/or technical information to summarize complex evidence, concepts, processes, or information presented in a text by paraphrasing them in simpler but still accurate terms.