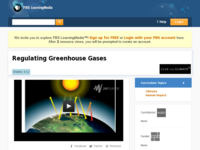 This video highlights the work of climate scientists in the Amazon who research the relationship between deforestation, construction of new dams, and increased amounts of greenhouse gases being exchanged between the biosphere and the atmosphere.

MS-ESS2.A1:All Earth processes are the result of energy flowing and matter cycling within and among the planet’s systems. This energy is derived from the sun and Earth’s hot interior. The energy that flows and matter that cycles produce chemical and physical changes in Earth’s materials and living organisms.