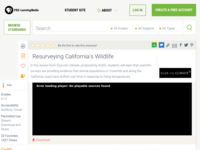 In this video, students learn how scientific surveys of wildlife are performed at a site in Yosemite, California. These surveys, in conjunction with studies from the early 1900s, provide evidence that animal populations in Yosemite have shifted over time in response to rising temperatures.

US Southwest
See more for this region.

HS-LS4.C3:Adaptation also means that the distribution of traits in a population can change when conditions change.