Jump to this Video »
Is Earth Warming?
http://www.youtube.com/watch?v=-IuVzcp39rs&list=PL38EB9C0BC54A9EE2&index=2&feature=plpp_video 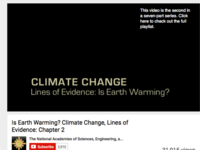 This video is part two of a seven-part National Academies series, Climate Change: Lines of Evidence. The video outlines, with the use of recent research and historical data, how we know that the Earth is warming.