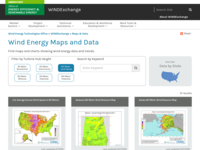 This is a utility-scale, land-based map of the mean annual wind speed 80 meters above the ground. This map can be used to evaluate the potential for wind energy in the US. State maps and more information are linked from the main map. Learn more about Teaching Climate Literacy and Energy Awareness»

MS-ETS1.B1: A solution needs to be tested, and then modified on the basis of the test results, in order to improve it.

MS-ETS1.B4: Models of all kinds are important for testing solutions.

HS-ETS1.B2: Both physical models and computers can be used in various ways to aid in the engineering design process. Computers are useful for a variety of purposes, such as running simulations to test different ways of solving a problem or to see which one is most efficient or economical; and in making a persuasive presentation to a client about how a given design will meet his or her needs.

HS-C1.3: Patterns of performance of designed systems can be analyzed and interpreted to reengineer and improve the system.

The National Renewable Energy Lab has a mapping tool to evaluate all forms of renewable energy: RE Atlas
Jump to this Static Visualization »