Jump to this Video »
Solar Panels for Your Home
http://www.pbslearningmedia.org/resource/oer09.sci.ess.watcyc.solarhome/ 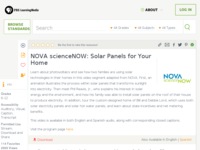 In this video segment from NOVA's Saved By the Sun hour-long video, students learn about photovoltaics and see how two families are using solar technologies in their homes. The video introduces the ideas of state incentives and net metering benefits.