Jump to this Video »
Soil Microbes and Global Warming
http://www.pbslearningmedia.org/resource/ean08.sci.ess.earthsys.microbe/ 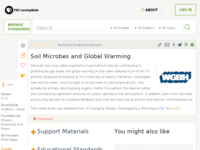 In this video, adapted from KUAC-TV and the Geophysical Institute at the University of Alaska, Fairbanks, viewers learn how one-celled organisms in permafrost may be contributing to greenhouse gas levels and global warming.

US Alaska
Find more resources for this region.