Jump to this Video »
Hoover Dam and Hydroelectric Power
http://www.pbslearningmedia.org/resource/phy03.sci.phys.energy.hooverelec/ 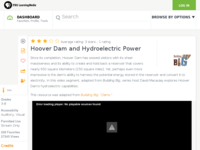 This video segment is adapted from Building Big, a PBS series hosted by David Macaulay. It explores Hoover Dam's hydroelectric capabilities by explaining how it is able to harness the potential energy stored in the reservoir and convert it to electricity. It also discusses environmental impacts of the dam and others like it.

MS-PS3.A1: Motion energy is properly called kinetic energy; it is proportional to the mass of the moving object and grows with the square of its speed.

HS-PS3.A5: “Electrical energy” may mean energy stored in a battery or energy transmitted by electric currents.

Other Alternatives
Find more resources on this topic.