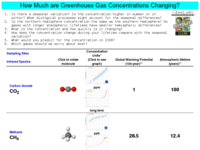 This is an interactive table with a comprehensive list of 29 greenhouse gases, their molecular structures, a chart showing a time series of their atmospheric concentrations (at several sampling sites), their global warming potential (GWP) and their atmospheric lifetimes. References are given to the data sets that range from the mid-1990s to 2008.

MS-PS1.A4: In a liquid, the molecules are constantly in contact with others; in a gas, they are widely spaced except when they happen to collide. In a solid, atoms are closely spaced and may vibrate in position but do not change relative locations.

HS-PS1.A1: Each atom has a charged substructure consisting of a nucleus, which is made of protons and neutrons, surrounded by electrons.

Cause and effect, Energy and Matter, Structure and Function
See Details »

hide
Cause and effect, Energy and Matter, Structure and Function

HS-C6.2: The functions and properties of natural and designed objects and systems can be inferred from their overall structure, the way their components are shaped and used, and the molecular substructures of its various materials.

HS-P1.1: Ask questions that arise from careful observation of phenomena, or unexpected results, to clarify and/or seek additional information.